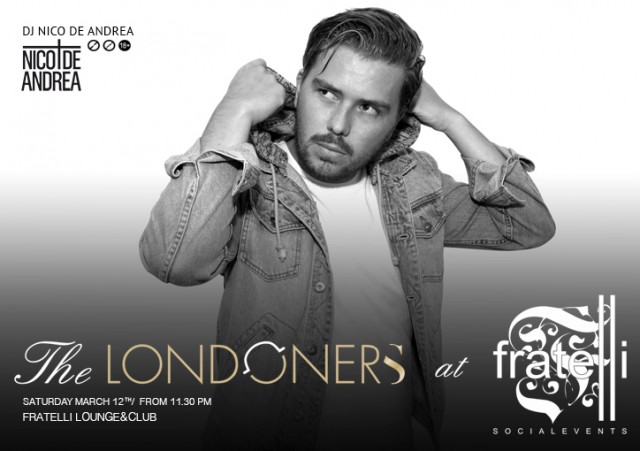 DJ, producer, remixer and member of the “So, Happy in Paris?” team with Michael Canitrot all around the world, Nico became one of the most influent artists on the house music scene. As international Dj Producer, he signed on Tiesto’s label Musical Freedom, Nicky Romero’s label Protocol, Bob Sinclar’s Africanism and Defected Records.

Nico de Andrea has performed the opening act for artists such as Erik Morillo, Carl Cox, Roger Sanchez and Dennis Ferrer in some of the greatest venues in Paris, Miami, Cannes, London, Milano and Dubai. His first EP “Ailleurs” has been released on Michael Canitrot’s label AIME MUSIC and his brand new single “I found you” alongside Mikael Weemets & Yasmeen will be released this August by Tiesto on his own label Musical Freedom.

Moreover, he is an iconic Dj of Miami nightlife with a new US Tour in this March, alongside Bob Sinclar, Mark Knight, Klingande, Michael Calfan & Autograf!

Set the grooves for Saturday night, for an exceptional party with The Londoners @ Fratelli Iasi and Nico de Andreea!

Free entrance until 00.00. For reservations: officeiasi@fratelli.ro / 0756.56.11.11. Fratelli reserves the right to select its clients, due to the capacity of the locations and the reservation list.