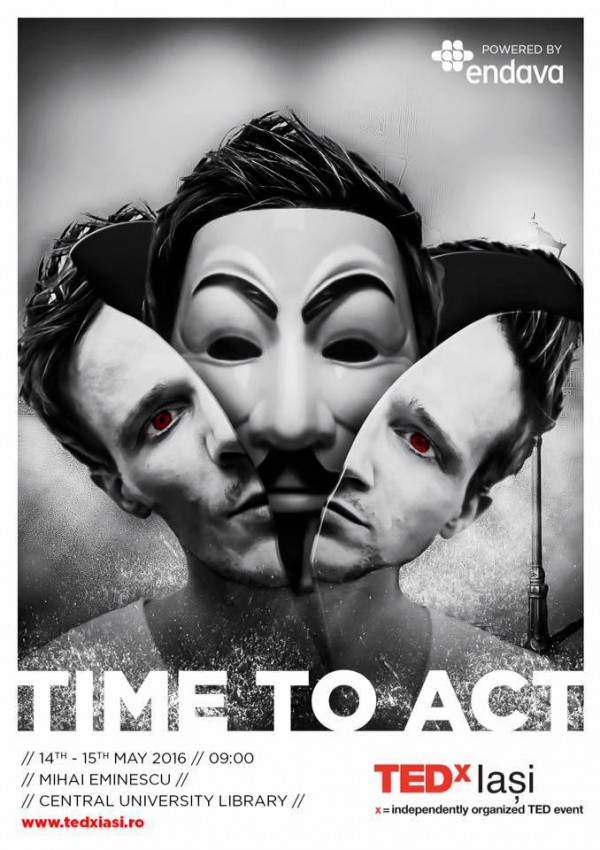 The first romanian to swim the English Channel, Andrei Rosu has been involved in a very diverse array of activities. He is an endurance athlete, blogger, writer and motivational speaker. Andrei also likes to participate and organize different charitable and sportive events, as well as social projects.

Cristian Lupşa is the editor of DoR (Decât o Revistă), an independent quarterly magazine covering Romanian social change, cultural trends, politics, and technology. Cristian graduated from the University of Bucharest in 2003, and then, in 2005, earned an MA in Journalism from the University of Missouri-Columbia, the world’s oldest journalism school. He returned to Romania in 2007, and was a senior editor for Esquire RO, freelanced for various outlets inside and outside the country, and taught narrative journalism to students and professionals. In 2009, he started DoR. He spent the 2013-2014 academic year as a fellow at the Nieman Foundation for Journalism at Harvard University. When he’s not on duty, he pays close attention to World Wrestling Entertainment.

One of the most experienced journalists in Romania, Lucian Mindruta has been involved from 1992 until recently in many different projects revolving around print advertising, television, social media, and, sometimes, in projects that didn’t require media at all.

Today he helps others learn more about the things he has always had a soft spot for: public speaking about brands, as well as the art of stuttering as little as possible on TV. Lucian likes the people who disagree and loves the ones that agree with him. He has a few fancy hobbies, but if you ask about it, he will act like in a very casual manner. Lucian usually bikes to the seaside, but not because his bicycle is more expensive that a car. The idea of sailing as the wind blows appeals to him so much that he also does sailboating.

He can be found on DigiFM, where he gives voice to the people, through tens of thousands of speakers, and also on Facebook, where he comes first and leaves last.

With ten years experience in various fields of activity such as financial services, retail, online marketing and e-commerce, Rareș Florea presently holds the position of CEE Commercial Director at Vector Watch. A graduate of the University of Bucharest, Faculty of Public Administration, Rareș interacted with the international business community from the very start, handling the commercial relationship with strategic partners from Central and Western Europe.

He then continued to strengthen his professional ascent by occupying key positions in several leading companies such as Bancpost or Groupon Romania by managing international contracts and business relationships. In 2012, Rareș joined Upstream, a leading provider of mobile marketing solutions with a strong presence in over 40 countries, as Director of Acquisitions. Between 2012-2015, Rareș held the position of Online Sales Manager at PayU Romania, leader of the online payment industry in Romania.

In June 2015, Rareș joined Vector Watch, being responsible for the commercial performance of the company in Romania and South-Eastern Europe, while also overseeing the implementation of the company’s sales and marketing activities. During his very little leisure time, Rares is an avid basketball player, having received notable awards for his 15 years experience at a semi-professional level.

Andrei Botescu: I’m an urban bicyclist, passionated about reinventing the national identity from a modern perspective. I’m 38 years old, but my psychological age is somewhere around 17- 18. To be more specific I have the same habits that I had at that age – of visiting picturesque places, of experimenting unusual situations, as well as getting to know wonderful people. From time to time, when I get bored, I try to create something new. Lately I have realised that it’s more interesting to reconstruct something, than beginning from scratch, because you got a chance to create o community around that project.

Alexandra Manda, co-founder of Pegas, had his start in the business world by following his childhood dream of riding the bicycle, and not an ordinary bicycle, but a classic Pegas.
Thought more like a social project, this bicycle workshop does not want to offer just simple bicycles, but a whole national, urban identity. There is still some romanian spirit left, and he wants to show to the world, all there is about this country’s brands.

Petronela Rotar is a journalist with eighteen years of experience at newspapers and national TV stations. Born on May 21, 1977, in Brasov, Petronela Rotar is the mother of two teenage daughters.
She has published three books, between 2014-2015, two of poetry and one of short stories and is currently working on a novel. The first book O să mă știi de undeva has become a “phenomenon” being the only book of contemporary poetry that reaches the bestseller title in Romania. O să mă știi de undeva, together with the book of short stories Alive were designated by the readers as the best books of 2014. In 2015 she published a second volume of poems – Efectul pervers.
Petronela Rotar is the author of the blog acestblogdenervi.ro, a blog with tens of thousands of readers, Romanian speakers, across the globe.

Mircea Popa is the co-founder of SkinVision, a company which developed a mobile application based on an algorithm that evaluates moles.

Andrei Toma started his career in research. At the age of 11, embarked a train and made the the tour of Romania alone. After high-school moved to study in UK. In university developed a passion for modular systems. In 2011, started the first Romanian research company in UK. After numerous trials succeed to create a simple to use structure with many by-products such as energy harvesting devices, financial instruments and tools to measure sustainability. In November 2015 Andrei showcased at Old Billingsgate in London, along with other top 99 innovators, a structure to make comestible toys.