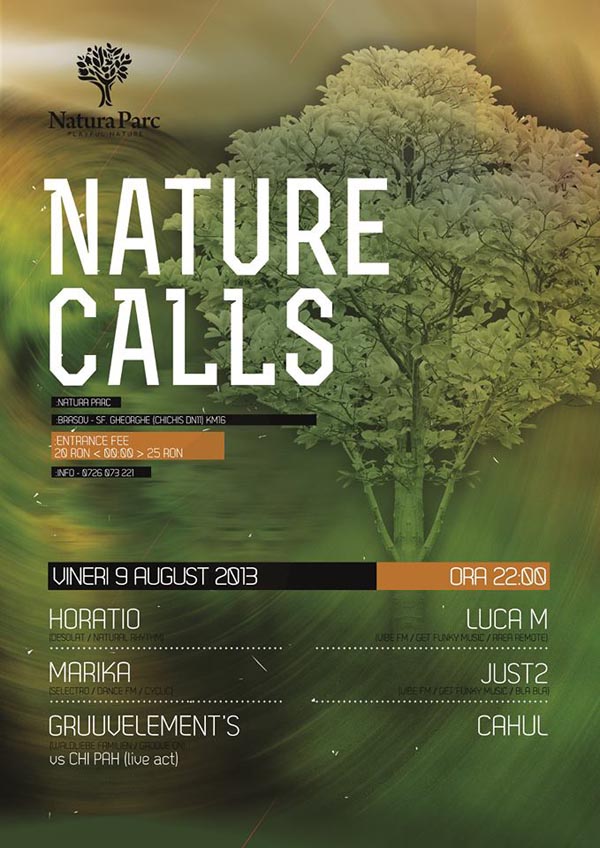 The larger than life eastern European is reflective of the company, with a legacy that stretches from the erstwhile grooves of super group Ar:Pi:Ar to the monolithic presence of Bucharest club Du Jour Kristal. Since exploding onto European notoriety with his sex-drenched remix of Riva Starr’s ‘When I Was Drunk’, Horatio has hit the dance music fraternity with a bevy of pounding beats. His fans have ranged from Vilalobos to Reboot, Heidi to Hawtin, with DJ’s across the planet enjoying his sassy interpretations of the razor sharp grooves of modern dance music.

Florin Marica (MARIKA) is one of the few DJ’s, producers, and promoters, who got himself profoundly involved in the underground music phenomenon from Romania, in the 1990’s. Fun Radio, 2M+ (Activ FM), Pro Fm Dance, Vibe FM are just some of the radio stations where Marika promoted selections of electronic a that were made according to the listeners’ needs, but focusing on important contributors of this genre, from Romania. Producers, promoters and everyone who gravitated around the electronic music universe were invited in the framework of Marika’s radio shows, which were also the background for live performances and mixes.  In 2005 Marika reaches up to the final of a well-known national DJ contest – Heineken – being frequently invited to the majority of Romanian clubs, before this contest-tour and even more afterwards. Also in 2005 Marika begins his collaboration with Expirat Club and Other Side, each Wednesday night being supported and entitled Selectro: DJ Marika & Guests. The guests are DJ’s, local and foreign producers from the electronic music industry, DJ sets or live performances.

In 2010 Selectro is invited to organize its own scene, with local and foreign guests, on the platform of Sunwaves Music Festival. In 2010 and 2011 Selectro gets the award for the “Best concept for a series of parties in Romania” at the Nights.ro Awards. Selectro is also the name of Marika’s radio show every Wednesday night on Dance FM.

Two young guys from Bacau, Mihai Volonci and Wac’s, are having a full time job called “playing with sounds”. Tech-house and Funky-house defines and represent both of them, and in August 2010 they decided to co-operate, and to improve their potential by founding GruuvElement’s. Two young and restless DJs, are motivated in all what they are doing by MUSIC. Several EPs have been produced and tracks remixed of artists such as: Daniele Kama , Michael Otten , Patricia Edwards , A++ , Nick Hollyster , Larry Peters, and many more, enjoying a great support from the biggest names of electronic music industry such as: Richie Hawtin , Stacey Pullen , Markus Schulz ,Horatio, Luciano , Dj Sneak ,Simone Vitullo, etc. Release : K9 Records , Elegant Bit , Reload , Quanticman ,Waldliebe Familien , Bedroom Muzik , Groove A Lot Records , Orunmila , Ritmikal Records , Rare Music

Luca M is a firm favorite of many of the tech house front runners and if you take a listen to his productions, its easy to understand why 2013 is set to be a great year for Luca! Luca acquired his production skills through patience and determination starting with the most basic of equipment. At times it was a steep learning curve, but as his confidence and technique grew, he began to forge his own distinctive style. Beginning in 2008 with releases on local Romanian labels such as Sintope Digital, and Italian labels like Italo Business and 303Lovers, it wasn’t long before more established imprints began requesting tracks. Significant releases include ‘Grumpli’ on Starlight Unlimited, ‘Pufarine’ on Area Remote, ‘Habarnam’ on Cr2, ‘Alinare’ on Steve Lawler’s VIVa MUSiC, ‘Peak Week’ in collaboration with JUST2 on Kittball, and the ‘Principe’ EP on Carlo Lio’s Rawthentic Music. ‘Melilla’ was included on ‘Defected in the House: Miami ‘11’ mixed by DJ Chus and David Penn. In fact, Luca’s output has been nothing short of prolific with tracks and remixes across a wide selection of labels. He has also found time to launch his own label, Get Funky Music, in collaboration with Romanian duo JUST2. So what exactly gives a Luca M track its special quality? It ’s a dynamic combination of energy and groove underpinned by a funk-fuelled bassline. This is tech house in the true sense, and the secret behind his popularity with other DJs and clubbers from dedicated house heads through to techno connoisseurs. A good time is guaranteed when Luca is on the decks. “As a DJ and producer, “he explains, “when you see people enjoying your music, you can say mission accomplished! The mission is to make people happy. It’s the most beautiful feeling, and makes me stronger and more committed to finding a way to make my music even better.”

JUST2 was born in Romania from the love for beats held inside by two young guys, Radu & Mihai. By the age of 18 they entered into the music production foray and within one short year they have signed material on internationally renowned labels such as Kote Records, K9 Records, Potobolo Records, SK Supreme Records, Pura Music and many other equally important around the world, with their productions being plugged by superstar djs such as Marco Carola, Luciano, Paco Osuna, Daniel Sanchez, DJ Sneak, Nic Fanciulli, Fabian Argomedo, Niki Belucci just to name a few. JUST2 continued to focus on their production skills and decided to take the studio job full on — and full time,making themselves able to release crisp clear productions, all of which are created to mark their place into the heart of dance music lovers worldwide. 2011 was the beggining of a new story for the duo, when they started up a label together with their good friend Luca M, called Get Funky Music. As A&R for their label they managed to sign some of the biggest names in the industry, like Tube&Berger, Mario Ochoa or Mikalogic, besides regular remixes and releases from themselves. As DJs, they managed to kill the crowds every single time they were behind the decks, with mind-blowing sets which, at times, were as long as 6 hours. Great things are to expect from this young duo of DJs/producers, which are already establishing themselves as remarcable names in the music industry, making JUST2 a project worth watching throughout the years!