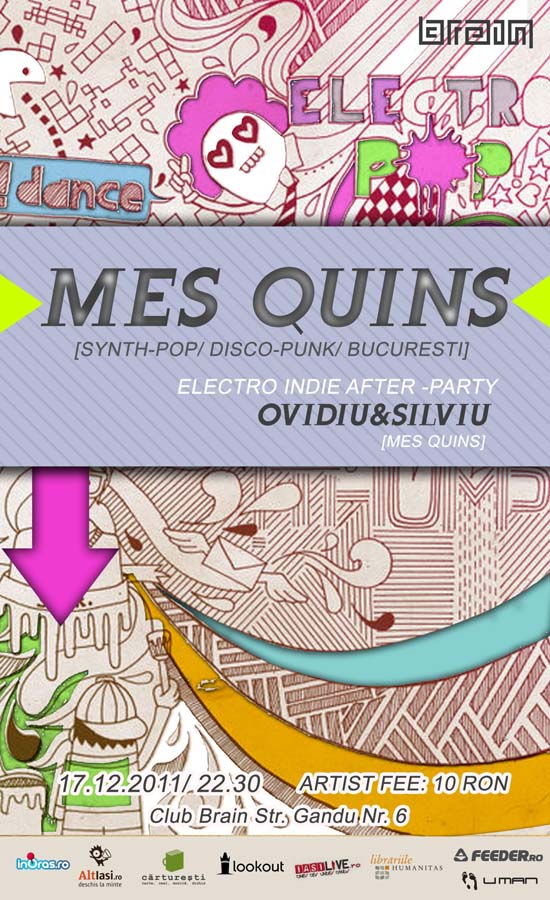 Mes Quins:
Back in 2008, Ovidiu Chihaia and Silviu Gherman decided to start up a band – Mes Quins, a synth-pop effort with disco overtones based in Bucharest, Romania. In his youth, Chihaia, a precocious guitar-player, had been part of various underground Bucharest acts (Pure, Guillotines and Hotel Fetish), thus enriching the band with valuable showbiz know-how, a skill that Gherman didn’t have. Besides a passion for electronic sounds, Gherman had been acting in various TV commercials and writing books. In fact, Mes Quins’ very first concert was at a release party for Gherman’s second book.

Following such an explosive debut, gigs came and went rapidly for Mes Quins, until the two of them lost count and in the haze of such success hired a bass player (Gina Teslaru) and a drummer (Ovidiu Rusu). They’re like family now.

In 2009, Mes Quins played gigs in most Bucharest clubs, opened for Namosh, Handsome Furs, Noblesse Oblige and Kissogram, shocking the audience on every occasion with their overtly sexual image and a total lack of style to support it.

“Mes Quins are one of the most interesting newcomer bands of Bucharest’s underground scene”. – Time Out Bucharest

“If you haven’t listened to Mes Quins yet, it’s a must, especially if you’re into an eclectic mix of synth-pop, disco-punk and electro-kitsch”. – Metropotam

“Mes Quins know how to make their mark, being different not only from others, but reinventing themselves as they go along”. – iConcert