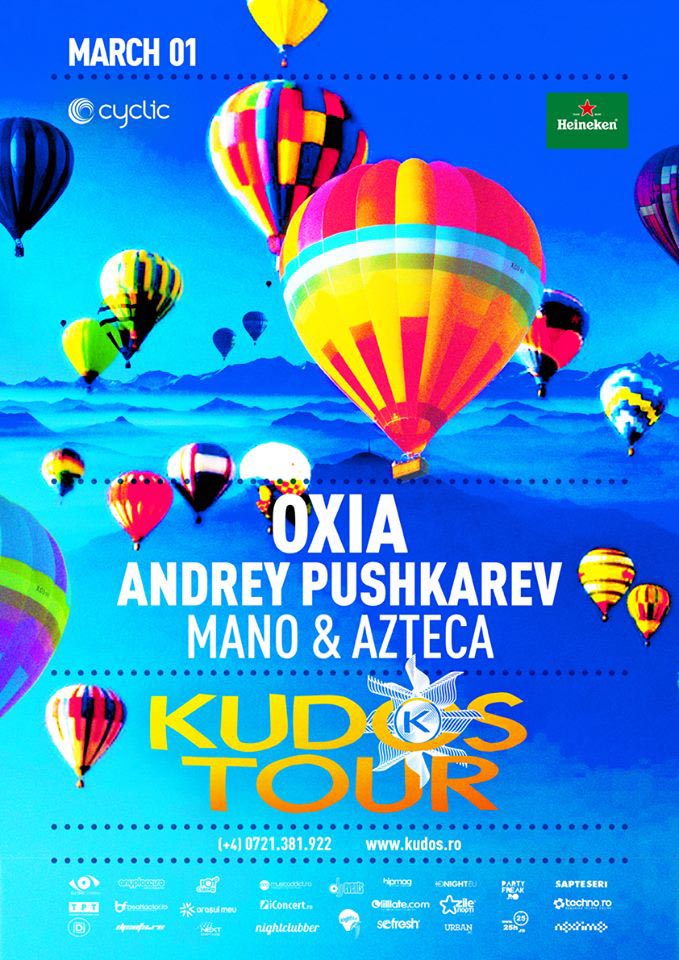 Olivier Raymond, born in 1971 in Grenoble (France), got into “black music” (disco & funk) already in his early teens. During college years, Olivier’s friendship with Stéphane Deschezeaux, kick started a musical journey, with a debut on a local radio station broadcasting a show dedicated to Funk … hence, only being 15 years of age, Olivier had started mixing. Olivier’s mixes were influenced by a large spectrum of music styles: electro-funk (Afrika Bambaata…), italo-disco, new-wave (Depeche Mode, New Order… ) and the early Chicago and New-York house scene.

By 1991, Stephane and Olivier bought their first bits of equipment and started to compose music. Not too long after that, Olivier became a resident dj at a club in Grenoble, jump starting a career in electronic music!
It was by 1994, that the experiments of Stephane and Olivier became official. Their live act ‘Oxia’ was born.
In 1995, Olivier and Stéphane met Michel Amato (The Hacker), Alex Reynaud and Kiko in Grenoble, the electronic-tuned city of France. That same year Olivier created Ozone records together with Kiko, where Oxia released the first EP (influenced by the American techno sound à la Jeff Mills, Robert Hood and Damon Wild). On that same stamp, Olivier also co-produced the first releases of Jack de Marseille.

Olivier never rested and went on to create a new label with Michel Amato aka The Hacker and Alexandre Reynaud in 1998. They baptized it ‘Goodlife’ in homage to the mythical Inner City track. Olivier and Stéphane still produced several EP’s together and by the end of the century they decided to part paths (as good friends) and Olivier continued with Oxia as solo DJ act. Oxia’s continued sound evolution gave birth to a series of EP’s & remixes on Goodlife but also on labels such as Intec, Terminal M, … leading to a worldwide dj diary. The excelling dj qualities were captured in several mix cds, and that’s not all. A page still unfolding, Oxia released his debut solo album ‘24 HEURES’ on Goodlife in 2004 that floats between groovy melodic techno and a deeper electro touch. Besides the major international press attention, ’24 Heures’ reached he n°5 in the category ‘best album’ by the readers of Trax magazine.

After an extended period of touring, Oxia returned with some A class releases & remixes in 2006. ‘Domino’, on the German Kompakt stamp, became a worldwide hit played by every DJ you can think of. More Oxia releases for the English Tsuba stamp (collaboration with Eric Borgo), Confused (collaboration with Gino’s) and another banger on Kompakt (‘Not Sure’). The new release on his Goodlife stamp (‘Lost Memory’) finally came in December 2007. The icing on the cake came in 2008 when Oxia got voted in second & third spot in the Beatport Music Awards ‘Best Remix’ (Oxia remix for Butch ‘On the line’) and Best Techno Artist.

The list of remix requests got longer and longer. As you can imagine, this contributed to a busy dj schedule which even got more intense by the vibrant dj battle done with his good friend Agoria. In 2009 Oxia did not shy from releasing some more fine material. In October the ‘Sun Step’ EP was released on 8Bit record reaching immediately top rates in charts like Beatport, Resident Advisor, etc. He mixed the fifth anniversary compilation of Systematic (a selection of tracks exclusive to the Systematic compilation), including a previously unreleased track (‘Trying Out’) produced with his friend Nicolas Masseyeff.

2010: With Nicolas Masseyeff, a new release on Tsuba, ‘Keep the drums’, got released. Furthermore Oxia also remixed one of Nicolas’ tracks. For his long-time friend Agoria, Oxia delivered ‘Less time’ (Infiné Music) and with Eric Borgo he did another ep for 8Bit (‘Plastic Bed’).

2011 saw Oxia mixing another b-day compilation. This time he made a selection from the 8Bit cataloque for their 5th anniversary. On this mix you can also find a previous unreleased track of Oxia (‘Meaningful’). Soma wanted to have Oxia on the bill for their 20th anniversary so he contributed his interpretation of the ‘Human’ track by Slam.
But most importantly Oxia has finished his forthcoming 2nd solo album, it will release on InFiné Music in May 2012.

After so many years in the game, Oxia is still at the forefront of the international electronic scene, never losing sight of all influences he had along the way and keeping one strong element in his music, and that is groove!

Andrey PUSHKAREV is a Techno DJ from Russia performing worldwide. He is popular with his audience for his signature sensitive melodic Techno sound and is notable for using vinyl records from his large ‘library’ that he has been adding to for more than 10 years.

He was born in 1981 in Votkinsk – a small town in the Ural region. He had no music training, yet he gained popularity in Moscow, and then found his way into the international world of electronic music. Andrey is notable for his deep and minimal sound, exquisite taste, great skill and powerful delivery of his sets.

It all started when he was a child – Andrey spent a lot of time listening to “Vega”, a classic Soviet vinyl record player. Later on he got his first audience, when he volunteered to work for school radio. He earned his first money playing a set at a nightclub when he was only 15. In a short time he realized that he had outgrown the limits of the small town and made up his mind to move to Moscow. Another reason for his move was that the only club in town had closed.

In 2000 he moved to Moscow and started performing in Moscow clubs. Aside from DJ-ing he got into the field of international music business – he started working for a German company Traum Baum. For three years he was responsible for wholesale of imported CDs, DVDs and Vinyl Records in Russia. “I had an opportunity to contact DJs, promoters, and resellers worldwide. It was also a great chance to have an insider look at this professional sphere. I had access to fresh records and all the information concerning electronic music”. Part of his job was making decisions on record selection and that subsequently helped him to put together a personal collection of more than 5000 rare vinyls containing the best Techno and House tracks.

In the years 2006-2011 he worked with an online radio Deepmix Moscow Radio (Deepmix ru), broadcasting non-commercial Techno to a great number of listeners in 53 countries worldwide. He also performed at weekly events organized by Deepmix Moscow Radio in Moscow clubs such as Mix, Minibar, Paparazzi, Rodnya Studio. Over that time he recorded about 200 sets.

In April 2010 he started working with digital recordings. But a year later he reverted back to vinyl, opting for the quality of sound and the variety of material provided by his collection. He currently collaborates with several FM and Internet radio stations recording his new sets

It all started in 2004. AZteCA was just sixteen years old, when he had his first contact with House Music at a Romanian beach party. It was an indescribable feeling for the young Transylvanian kid, who was at that time mostly known as an athlete, participating in alpine ski races in Romania, and in other European countries (these days he is a ski instructor) .
As he says of that moment, “ I just felt the music.” Of course this wasn’t a coincidence, because he had already been collecting dance music classics since the age of 14.

This dance music feeling evolved into a much more intense love for House Music (especially Deep House and Tech House). “I love it when people smile when I ‘m playing” says AZteCA , and he found that the most suitable style for creating this feeling , House.

Collecting music doesn’t make somebody a DJ. AZteCA taught himself step by step the tricks of this trade. In the beginning he played at home with the Virtual DJ Program, and after two years with the help of his parents he was able to buy his first set of DJ equipment. One year later , Transylvania’s most luxurious club opened it’s gates, Studio The Club. After playing there for the first time, he was given the residency of the place, and played there for 8 months.

There was, however, a bigger moment in AZteCA’s career. In the 2009 JustMusic DJ Championship, he not only achieved 3rd place thanks to the votes of the listeners, but he also won the prize of the radio staff , for his technical talent and for his refined taste for music. The prize gave him the opportunity to start a new radio show on Justmusic.fm, which he called House Experience. This radio show is on the air every Friday from 16.00 to 18.00. Each week, he plays his own choice of tracks for the week, as well as guest mixes by those DJs from whom he learned.