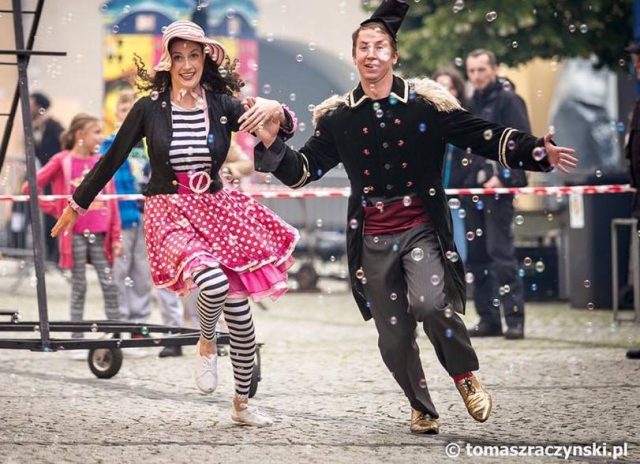 Unusual theatrical spectacle performed by the actors from „Scena Kalejdoskop”, based on the novel by Lewis Carroll “Alice in Wonderland”. The SK artists undertook quite a challenge, namely they moved the action of the above-mentioned novel to the world of circus.

The title character is transferred while falling asleep into a fantasy world where she meets many unusual characters. Eunika wanders with the spectator through the circus lands of her imagination, encounters on her way amazing characters, unearthly animals and other almost surreal creatures.

While Eunika is experiencing some extraordinary adventures, she gets deeper and deeper into the world of imagination, which captivated her completely. Will Eunika find her way into the real world, and perhaps more importantly, does she want to return to this world?

The original idea and attention to every detail have resulted in a very interesting performance, which in the open-air form takes on new meanings. The “Eunika…” spectacle is not only beautiful costumes, original masks, circus elements, but also unique music and thrilling action that captivate the spectator into a whirl of events.

The open-air spectacle “Eunika…” is a spectacle not for children or for adults only. Lewis Carroll has in truth entered in his novel two books: for adults and for children. The artists from „Scena Kalejdoskop” made every effort to keep this remarkable message in their performance.

“Eunika…” should not only delight with the picture, sound, expressiveness of the body, acting or special effects, but most of all she should teach. Teach how to ask questions: how to make the right choices, which ways will lead to the target and whether there is a boundary between the world of the imagination and the real world…