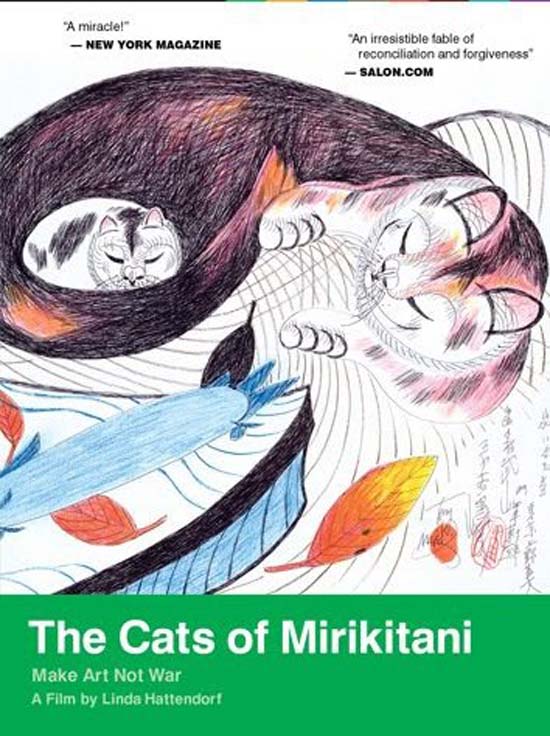 “Make art not war” is Jimmy Mirikitani’s motto. This 85-year-old Japanese American artist was born in Sacramento and raised in Hiroshima, but by 2001 he is living on the streets of New York with the twin towers of the World Trade Center still ominously anchoring the horizon behind him. What begins as a simple verite portrait of one homeless man will become a rare document of daily life in New York in the months leading up to 9/11. How deeply these two stories will be intertwined cannot yet be imagined. This is the story of losing “home” on many levels.

How did Mirikitani end up on the streets? The answer is in his art. As tourists and shoppers hurry past, he sits alone on a windy corner in Soho drawing whimsical cats, bleak internment camps, and the angry red flames of the atomic bomb. When a neighboring filmmaker stops to ask about Mirikitani’s art, a friendship begins that will change both their lives. In sunshine, rain, and snow, she returns again and again to document his drawings, trying to decipher the stories behind them. The tales spill out in a jumble — childhood picnics in Hiroshima, ancient samurai ancestors, lost American citizenship, Jackson Pollock, Pearl Harbor, thousands of Americans imprisoned in WWII desert camps, a boy who loved cats… As winter warms to spring and summer, she begins to piece together the puzzle of Mirikitani’s past. One thing is clear from his prolific sidewalk displays: he has survived terrible traumas and is determined to make his history visible through his art.