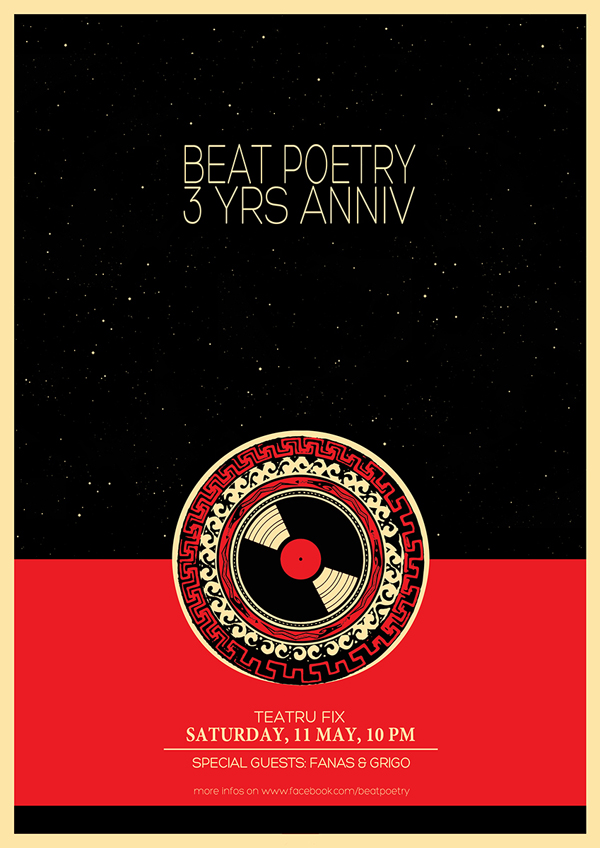 We are overwhelmingly excited to announce that we are turning 3 this month. To celebrate this occasion we gather one more time at our lovely new spot, Teatru FIX, together with two special guests who go by the name of Fanas and Grigo, along with the regular hosts Scuffle, Kidamn, SPDY and fKy.

The music event called Beat Poetry first took place in Club Brain on May 1st 2010. What was at first just a music night, now is much more than that: an experience, a collective, a sound journey – an evolution of thought and senses, an evolution of music and different art forms. Here we all are, 3 years after that particular moment in time, celebrating with lots of hard beats, raving psyche sounds, thug jazz, riot funk, and various dub / electronica only to remember that the “beat scene” is, in fact, a multi-genred, multifaceted, deep, deep well of sound.

Fanas was born in a town on the bank of the Danube, where his mother, the “poetess”, was the first to wake his interest for art. Inspired by the simple Romanian folk music made on the streets, and then by African rhythms, funk and jazz, Fanas began creating his own music searching for a style that would define him. Paying attention to composition and rhythm, he has exercised his virtuosity by playing on the MPC, a sampling toy which he managed to maneuver polivalently, using his hands and feet. Fanas’ artistic portfolio boasts 6 albums released so far, 5 solo albums and 1 with his hip-hop crew Beatehas (where he has collaborated with two legendary figures of American hip-hop: Percee P and Brand Nubian’s Sadat X). As a constant to his esthetics, Fanas means contagious grooves: jazz-funk that now mingles with the club vibe of electro.

Struck with the hip-hop virus back in the 90’s, Grigo started as a bboy in his home town, Tulcea. He then moved to Galati, where he met other bboys, mc’s and grafitti artists. After a couple of years, together with his homeboy Nosferatu he started organising hip-hop parties and also some of the best hip-hop concerts in Galati. With the experience gained from all this, Grigo moved to Bucharest where he met the homies from Facem Records. In this period he bought his first pair of turntables and started his journey as a dj. Doing mixtapes and features, scratching for different crews and friends, Grigo was the dj for groups like CTC or rappers like Carbon, Cedry2k, Aforic, just to name a few. In the past year he entered the electro scene, playing at different parties organized by Basewise Crew. Presently he is part of the Chronic project, alongside Tecko Starr and Chil Will, and is invested in one with his brother from another mother, Fanas.

Beat Poetry aka A reunion of shifting sounds